How we use the land or the trace of cellular phones

Ten thousand million calls from 17 million users during 55 days allowed to paint on a map the use of the land that the inhabitants of the five most populous Spanish cities do (Madrid, Barcelona, Valencia, Seville and Bilbao), and for the first time, compare them together. A group of researchers from IFISC has made an "x-ray" of each city, according to the main use that citizens make of each area by processing large amounts of mobile phones data. It is an innovative method that can have an interesting practical application on public administration planning urban design in the future, based on real data from TIC.

By processing the amount of calls, the hours in which are made and geolocated data by algorithms for the analysis of functional networks the study concludes that there is a pattern in the use of the land amongst these cities. There exist four major land uses: residential, business (or commercial), nightlife and industrial (or logistic) in all of them. On the other hand, the study also shows differences in a small scale when some areas share land uses (for example, in Bilbao there exist more areas sharing residential and commercial use whereas in Madrid or Barcelona night and residential use is most shared).

To develop this research the perimeter of the cities has been demarcated up to the public transport does arrive. Subsequently, the cities have been divided into cells and mobile calls have been quantified every hour during for 55 days. Consequently, it is possible to know at which hours there is more activity and, by timetable, you can know how the territory is used (many calls at night or weekend indicates a nightlife area, while many calls during the day – mainly in the morning - suggest that there are priority commercial or business use in that place). 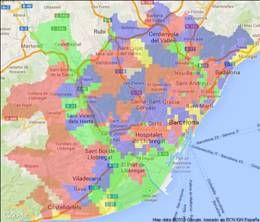