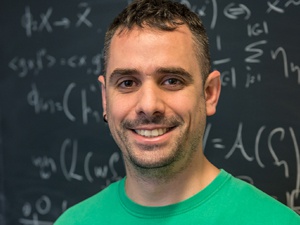 Profile
I am a scientist working on Complex Systems in the broadest sense, with a focus on information processing in biological and socio-technological systems.
Currently, I am very interested in understanding how the flow of information between entities at different scales can shape both biological and social phenomena -- e.g. how people organize themselves into institutions, which in turn enhance or constrain people's behavior; or how individual organisms such as cells yield their agency to greater bodies such as tissues or organs. I am very interested in the computational and evolutionary processes that such cross-scale mechanisms can articulate. All this stuff has tangible implications for living systems, determining in what directions Darwinian evolution can proceed; and in social systems, eventually with important socio-economic consequences that can affect us deeply.
Not so disconnected from this, I still remain very interested in the study of neuroscience and the brain -- which is the ultimate system integrating information across scales. Some of my research lines deal with machine learning as well.
During my PhD, I have studied Pareto (or multiobjective) optimization, especially as a framework that allows us to generalize concepts from statistical mechanics to arbitrary Pareto optimization problems. We applied these insights to locate phase transitions in Pareto optimal complex networks and in a toy model of human language as a communication system, among others. Pareto optimal systems result in tradeoffs between optimization targets. One such paramount tradeoff happens between fast replication and computational, predictive power in living organisms. We have shown how behind this tradeoff lies one key to understand the emergence of complex life.
Earlier than all of this, I did some research in Brain-Computer Interfaces to reconstruct images with the mind, emerging rhythms in cortical circuits, neural cryptography, and sociolinguistics. Within my approach to Complex Systems, these topics are not as distant as they might appear. Instead, simple mathematical principles often underlie all these diverse fields.